Here is everything that I've done over the past few years. 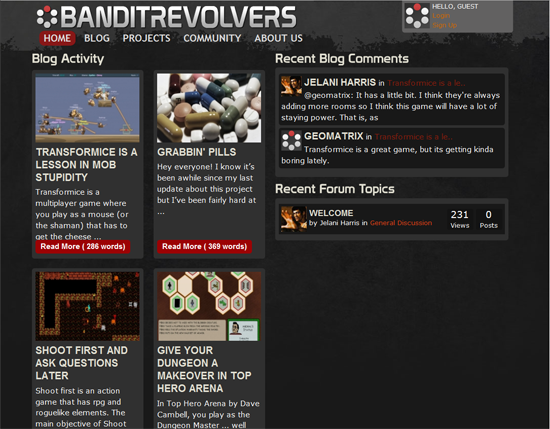 After I had closed down my old group blog website, I began to work on a new site that would host all of the comics and games that my friend and I have been working on. Due to the difficulty of finding a domain name that works, we decided to settle for the name Bandit Revolvers for our company – just because it sounded kinda neat.

I leveraged blogging code I had made for the Apparatus Complex and wrapped that around a new forum that handles all of the authentication and provides additional interaction. 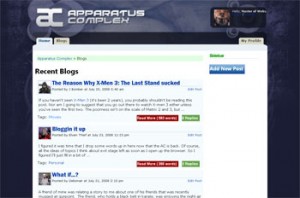 The very first iteration of this website was a project page on Geocities. Then I moved it to a group blog format on Tripod, and then to Blogger.com way before it was owned by Google. In an effort to bring more people into the site, I turned it into a public forum around mid 2003. Between 2003 and 2005 we had around 140 registered people on the site.

Then the site was dormant from 2005 to 2008, while I was busy with school and went through a period of being sick of administrating websites. Basically the site was drawing in a crowd of people that I didn’t like, and they were maneuvering the site in a social direction that I didn't desire.

An interesting way to look back on the history is to look at it using the Internet Archive Wayback Machine. It’s a little scary to see what life was like for me 5-6 years ago.

In 2009, I decided to bring the site back. The first reason is that I'm older now, and so were the original members of the site so we could provide more interesting conversations. The second reason was that I honestly didn’t want to waste a domain name that I was paying for.

So that time decided to go with a discussion-forum in a blog like format. People really liked the openness of the forums, but they also enjoyed the intimacy of the blog format. I’m had an algorithm to determine which posts are front-page worthy and people were assigned points to provide a bit of competition.

Unfortunately, despite of the work I put into the site it suffered from a low visitor volume and low rant submissions. Of course this was partly due to various social networks becoming the defacto standard and micro blogging services that provided better rewards for shorter posts than longer ones. Instead of putting anymore work into the site I decided to close it down in November 2009, and promptly sold off the domain.